TVSP Ltd imported the already tried and tested practice of using quaternary ammonium for cleaning external surfaces from the continent in the late 1990’s. It’s use on the continent was primarily for cleaning roofs and sports surfaces. In the UK tennis clubs adopted it immediately but roof cleaning enquiries became regular later in 2007. It is now almost an industry in itself. We were just in time to witness an unforeseen phenomenon related to the introduction of insulation in external walls : The appearance of a biofilm on white render in damp environments. The development of active gels followed. The Algoclear Process is supported by a team aggregating a wealth of experience in all aspects of surface chemistry and site related matters. We would not exist without tenacious contractors. Preparing a mossy roof for treatment is hard work at the best of time and the industry does not often stop to heat or cold. We are particularly indebted to those with talent for photography. 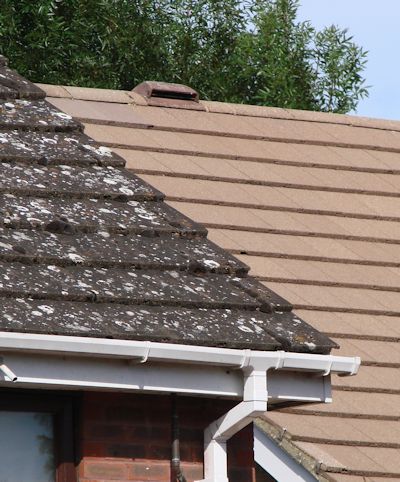